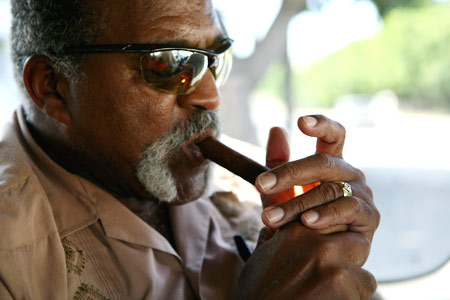 Born in 1975, I didn’t get to see Luis Tiant at the peak of his pitching prowess. In fact, my few memories of Tiant consisted of his unique, whirl-wind windup and his affable, cigar-chomping post-game interviews with the press after pitching for the Yankees. Only a few years removed from some incredible years pitching for successful Red Sox teams that seemed to come up just short year in and year out through the mid to late 70’s, my father would tell me how Tiant was a fierce competitor with impeccable control and a pure joy to watch on the field. In that era, some would say that if you had a must-win game, the man you’d pick to start it would be Luis Tiant.

As a mixed-race child of divorce, who grew up often feeling alone and displaced in the world, Tiant’s mystique as a Cuban exile captivated me. Even then, there was something about a man with no place that struck a chord with me. The pitcher I saw in his final years was but a shadow of his former self, but the numbers on the back of his baseball card didn’t lie. There was a time when Tiant was about as good as any pitcher in the game. In fact his 1.60 ERA in 1968 was the lowest in the American League since Walter Johnson’s 1.49 ERA in 1919, second in baseball that year behind Bob Gibson’s mark of 1.12, which still stands as the lowest in the modern era. Opposing batters hit .168 off of Tiant in ’68, a Major League record, as he notched 9.22 K/9 over 258 innings pitched. With his funky wind-up, his fu-manchu moustache and his ever present post-game cigar, he was a larger than life figure and his legacy of excellence inspired me to emulate his trademark delivery when I pitched out in the courtyard in front of our little garden apartment in Flushing. Even though he was on his last legs as a professional pitcher, he was one of my first baseball idols, a few years before a young flamethrower named Dwight Gooden would come along to sweep New York City off of its feet.

In 1961 Tiant was a young amateur, touring America as part of a traveling exhibition of Cuban players. Then the Bay of Pigs invasion occurred and Fidel Castro gave those players in the states an ultimatum: return home to play in Cuba or never return home again. Spurred by his father, Luis Tiant Sr., himself a fantastic pitcher in the American Negro League, who never had the opportunity to pitch off of a Major League mound before returning to a working class life in Cuba, young Luis stayed in America and carved out a name for himself as one of the era’s finest hurlers. In 2007, after 46 years spent in exile, Luis Tiant returned to his native Havana, followed by a film crew, lead by director Jonathan Hock. “The Lost Son of Havana” documents Tiant’s bitter-sweet return home.

Tiant’s journey back to Havana is a touching and poignant tale, which shows a side of El Tiante that we’ve never seen before – a man torn with regret, as he returns to find an aged and impoverished extended family that he felt in some ways he abandoned when he decided to stay in America. As much about Tiant’s family as it is about the pitcher himself, Hock does a great job skillfully weaving the stories of both Tiants, father and son, together. With a photo of his old man in tow, his only tangible connection to his past, he reminisces about his youth and talks with others of his generation who saw both him and his father play. We’ll never know, but many say that “Lefty” Tiant, the senior, with his confounding array of pitches was better than his son. Said by some to have invented the screwball, he once struck out the mighty Babe Ruth in an exhibition game and held him to lone single while facing him as a starter in both games of a doubleheader.

With Cubans living and breathing baseball, many in the streets of Havana knew of Tiant’s triumphs in the majors and welcomed him home like a conquering hero. A fun moment occurs when they visit a Havana park where men gather to talk baseball. When asked “who is the greatest Cuban pitcher of all time,” the mostly young crowd rattle off names familiar to current baseball fans, such as Orlando “El Duque” Hernandez and Jose Contrares, before one young man knowingly barks out, “Luis Tiant,” as the aged legend stands their behind them with a grin. As testament to Tiant’s tremendous success, Hock intercuts the film with a wealth of old footage from Tiant’s playing days, as well as interview clips from former teammates such as Carlton Fisk and Carl Yastrzemski. Along the way we hear of all the highs and lows of Tiant’s career, from his early days with the Indians, where he threw his hardest stuff, to his reinvention as a pitcher and the development of his tornado wind-up, after he suffered an injury plagued campaign in 1969. From his return to dominance in the 1970’s to his multiple comebacks in the early 80’s, Tiant comes across as a man who loved nothing more than to take the mound and pitch. Of course, we see his greatest on-field moments with the Red Sox, where Tiant became one of Boston’s most beloved athletes, averaging an astounding 280 innings pitched a season from 1973 through 1976 and ultimately leading them to a World Series appearance against the Big Red Machine in 1975. There Tiant put the team on his aching back, going the distance in complete game victories in Game 1 (a five-hit shutout) and Game 4 and received a no-decision in Game 6. 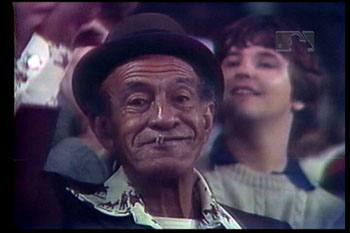 Perhaps the high point of the film comes as we look back at Game 1, before which Fidel Castro allowed Luis’ parents to go to America to watch their son pitch in the World Series. Before a frenzied Fenway Park crowd, Luis Sr. proudly took the hill to throw out the game’s ceremonial first pitch – a strike – that brought a thunderous ovation from the Boston fans. Denied the chance at his beloved sports ultimate glory because of the color of his skin, the father then got to watch the son pitch the game of his life on baseball’s biggest stage. Seeing that footage brought me to tears, as my father, a scouted high-school star, also once dreamed of pitching off that big league hill before his career was curtailed by injury. It’s times like those when the game transcends provincial, generational and cultural boundaries and becomes something greater than what we simply see on the field. It becomes more than just a pastime, but a link to our past itself, both personally and as a nation.

Hock’s crew takes us along with Tiant through his native city, who’s 1950’s architecture and automobiles seem so alien to him now. Sometimes shown in grainy images, as though frozen in time, the city of Havana itself comes alive for the audience as we are lead down its boulevards and alleyways, meeting people such as Juan Carlos Oliva, the brother of former Major League star, Tony Oliva. Juan Carlos was a talented ball-player himself but decided to stay in Cuba and served in Castro’s army as a tank commander before later becoming a baseball coach. Together he and Tiant talk of the many greats who never got a chance to prove their meddle and reap the rewards of glory and wealth in America. We also meet a childhood friend, named Fermin, who while taking a sentimental look at their youth, cannot help but convey his anger and envy at Tiant, whose career brought him riches beyond the wildest dreams of most Cubans. Of course we meet Luis’ extended family, living an impoverished life, far removed from that which Luis came to enjoy in The States. From the old aunts who last days draw near to the young ones who seem somewhat puzzled by all the commotion, it is a bittersweet scene as Luis feels the pain of having stayed away so long and finds out that many of the care packages he had sent home never made it to his family. Haunted by regret, we see Tiant give them necessities in short supply, such as needle and thread and toothpaste, before peeling off dollar bills.

As reviewer Michael Janusonis of the Providence Journal artfully pointed out, the film is indeed two tales. One is the story of Luis’ catching up with a family that he had lost touch with after all those years away. The other story is the tale of Tiant the pitcher and his triumphs in America, succeeding in ways that his father, denied the opportunities he was afforded, could not. The two stories are woven together masterfully and serve to make the film an engaging and rewarding viewing for fans and non-fans alike. Even my wife – who’s hardly a fan of the game and is truthfully sick of it, since it’s always on in our living room – enjoyed this film. If you are a fan of baseball, do yourself a favor and see this film immediately.